for greater detail see events listed in full below.... 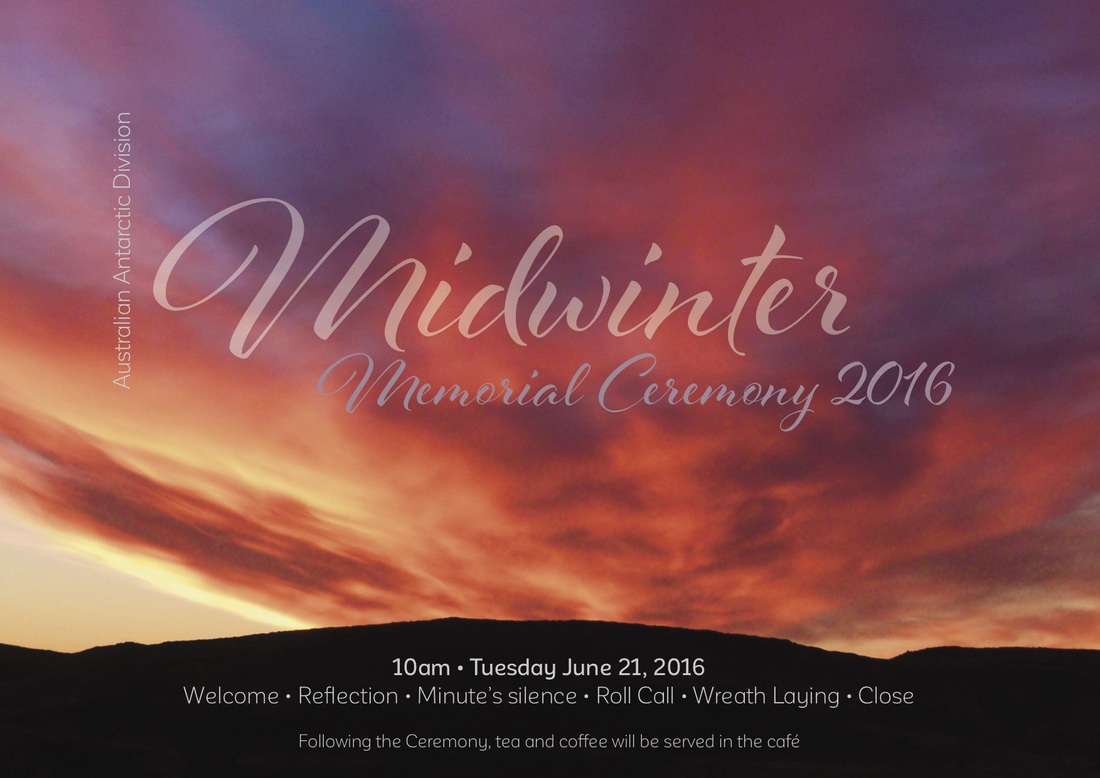 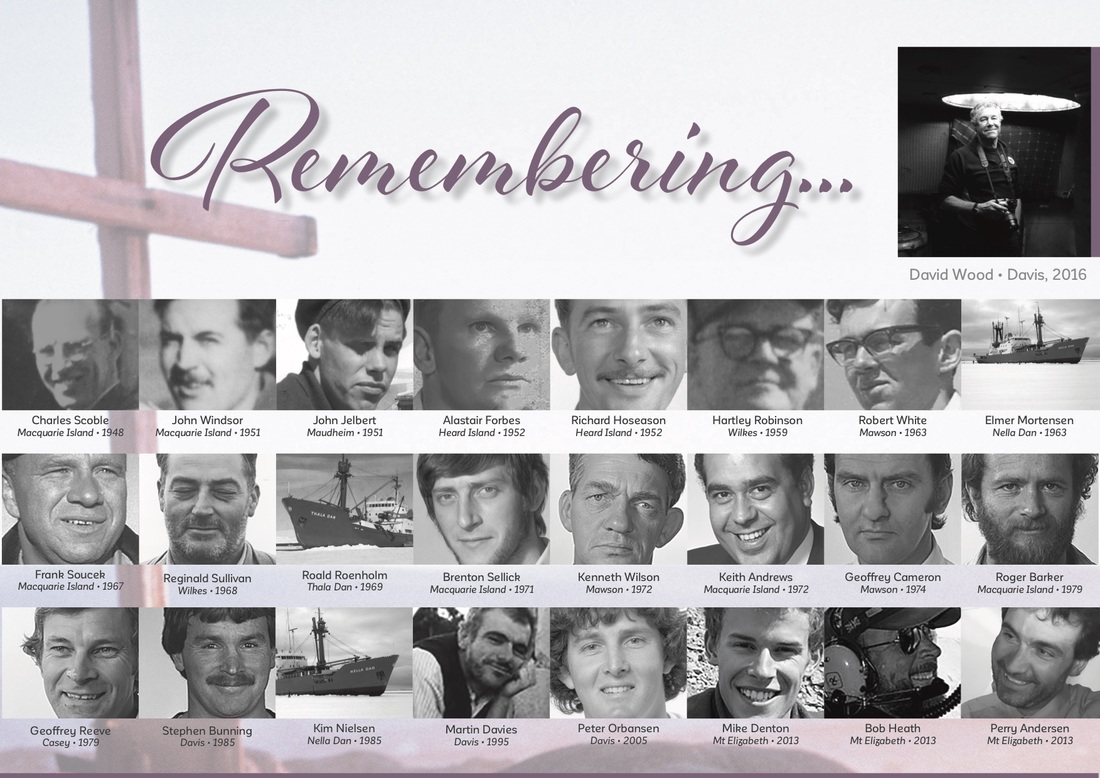 The Australian Antarctic Festival (September 8-11, 2016) will bring together individuals and organisations that make up the Antarctic community in Tasmania, to present an exciting four-day program of exhibitions, tours, entertainment and school visits.  For the first time in many years, the Aurora Australis and L’Astrolabe will be open for pubic inspection (by pre-bookings only) and we’ll see around 1,200 Tasmanian school children tour the Aurora and enjoy an Open Day at IMAS.  The Antarctic Expo in Princes Wharf No.1 Shed will feature displays by the Australian Antarctic Division, the Tasmanian Polar Network, TasPorts, Chimu Adventures and many more.  The Antarctic Film Festival at the State Cinema will screen an all-new list of Antarctic features and the Mawson’s Huts Foundation will stage a major fund-raising dinner at the Hotel Grand Chancellor.  Historical tours and two major competitions for Antarctic art and photography (offering a pool of $15,000 in cash prizes) round out the event.  With the exception of ticketed events like film screenings and the fund-raising dinner, the entire festival is free to the public.
Visit the fabulous Antarctic festival website for the program and stories....

THE MUSIC OF MAWSON’S HUTS

The Hobart Town Hall is celebrating its 150th birthday this year as we are celebrating 100 years since the Heroic Age of Antarctic Exploration.
The concert by the Derwent Symphony Orchestra is on Thursday 8 September at 7:00 pm in the Hobart Town Hall.
Hear one of our finest Tasmanian orchestras with chorus and the magnificent Town Hall organ play a full program of music that was popular in 1912, when Douglas Mawson and his party opened Australia’s first Antarctic station at Commonwealth Bay.

Enjoy music by Dvorak, Spilman and Arthur Sullivan, along with popular songs from the era. It’s fun and light-hearted and there might even be some singing along!

Tickets are free, but you must book below to secure your seat.
Register Now

Join your expert guide, Dr Lorne Kriwoken from the University of Tasmania, on a fascinating walk through the docks, parks and lanes of the Hobart waterfront while learning about the remarkable Antarctic history of this bustling port city.  Adventure, biography, science and whaling have all played their part in 100 years of Tasmanian maritime lore. Discover the hidden monuments and surprising traces of the Heroic Age of polar exploration along this easy-walking, 60-minute tour.
Tours are $10 per person (no concessions).Please meet your guide at the front door of Princes Wharf No.1 Shed. Please arrive 5 minutes early.  Tours are limited to the first 15 people to purchase tickets.

Festival goers can view an exciting re-creation of Amundsen’s return from the South Pole at the Husky’s Run on Sunday 11 September, as part of the Australian Antarctic Festival.  A team of live huskies will pull a vintage Antarctic sled along Franklin Wharf, starting at 11:00 am from Hunter Street.  The team will finish in Parliament House Lawns, where the Husky’s Picnic will allow parents and children to meet these working dogs, and other canine entertainers, from 10 am to 2 pm.  All activities are completely free to the public. The best viewing of the Husky’s Run will be along Franklin Wharf, from Mures to Waterman’s Dock.

A new exhibition of Roald Amundsen’s expedition to the South Pole will be unveiled at the Inaugural Australian Antarctic Festival in Hobart, 9 – 11 September 2016.
The specially created exhibition from the Fram Museum in Oslo, titled Lessons from the Arctic – How Roald Amundsen won the Race to the South Pole, consists of over 200 photographs from Amundsen’s historic expedition to the South Pole in 1910 – 12.  Many of the images have never been displayed before.
It will be opened by the Ambassador of Norway, Her Excellency Ms Unni Kløvstad, at the Brooke Street Pier on Friday 9 September and remain there on display for two weeks, before moving to the Institute for Maritime and Antarctic Studies (IMAS) on Castray Esplanade.
A Lifetime of PreparationHistorians, biographers and Polar experts have written many books on Amundsen and Scott, and the differences between their expeditions to the South Pole. Now, for the first time, the Lessons from the Arctic exhibition will show why Amundsen made the choices he did.  The exhibition explains in detail how Amundsen spent his youth preparing for a life in the Polar Regions, including his three years spent learning from the Inuit in the Arctic, all leading up to expedition to the South Pole.  It gives an insight into why he used Greenland dogs, why he tore out the old steam engine in his ship, the Fram, and replaced it with a diesel engine, and why Lindstrøm cooked American Hotcakes for breakfast every morning.
The images are from lantern slides taken by Amundsen during his South Pole Expedition of 1910-12 and used during lecture tours he conducted on his return. They are part of the Amundsen exhibition at the Fram Museum in Oslo, named after his ship the Fram which sailed into Hobart in 1912.
The Australian Antarctic Festival is a wonderful opportunity to display these historic images of Amundsen’s expedition to the South Pole,” said Ambassador Kløvstad.” I’m so pleased they will be unveiled in Hobart, as this city has a strong connection with Norway and its colourful Antarctic history.  After Amundsen sent a telegram to the King of Norway telling of his conquest, the great explorer stood on the steps of the Hobart Post Office and announced to the world on March 7, 1912 that he and his four companions had become the first to reach the South Pole. Norway is part of Hobart’s Antarctic history and we’re very proud of that,” said the Ambassador. “I hope this exhibition is enjoyed by many people.


The 2016 Phillip Law Lecture
August 21, 2016  Paul Cullen
Photo: A. Campbell-Drury via AAD.
The Phillip Law LecturesThe 2016 Phillip Law Lecture is a prestigious addition to a series of lectures presented in cooperation with the Royal Society.  The lecture honours the memory of Dr Phillip Garth Law, leader of the Australian National Antarctic Research Expedition (ANARE) and the Director of the Antarctic Division for 17 years.  Dr Law was responsible for the development of Australia’s first Antarctic stations and made 28 voyages to Antarctica, mapping dozens of sites for the first time.  Phillip Garth Law died in 2010 after a lifetime of service to Australia’s Antarctic program.

Professor Tony Worby, CEO of the Antarctic Climate and Ecosystems Cooperative Research Centre (ACE CRC) will give the 2017 Law Lecture on the topic: From Kyoto to Paris:  Tasmania’s Antarctic Science on the Global Stage.‘

“The ACE CRC is a joint venture between the Australian Antarctic Division, CSIRO Marine Research, CSIRO Atmospheric Research, the Commonwealth Bureau of Meteorology and the University of Tasmania as its core partners. The Cooperative Research Centres program was started in 1991 as an initiative to generate more focused, productive research and development from existing research infrastructure, rather than building whole new research agencies. CRCs are partnerships among universities, Commonwealth and State research agencies (such as CSIRO and the Australian Antarctic Division) and policy and industry sectors. The objective of these partnerships is to use the existing research infrastructure to target specific industry and community issues of national significance. Antarctica and its surrounding Southern Ocean is becoming recognised as a major engine room of global climate and oceanographic processes, having major effects on the rates of global warming, sea level rise and the processing of greenhouse gases such as carbon dioxide”.   –  Australian Antarctic Magazine – issue 6, Autumn 2004

The lecture provides a fascinating insight into the significance of Antarctic science here in Hobart, with the collective resources of of one of the world’s largest pool of Antarctic and Southern Ocean scientists.  It is this scientific credibility and strength that allows Australia to play a leading role in the Antarctic Treaty organisation and in the remarkable long-term international agreements that have preserved Antarctica as a refuge for peace and science through 50 years of intense political and social change.
Don’t miss this important lecture from one of our leading scientists and most popular presenters.

The 2016 Phillip Law Lecture will be given at CCAMLR (Commission for the Conservation of Marine Living Resources, the former Hutchins School at 181 Macquarie St) at 5:30pm on Friday 9 September, as part of the Australian Antarctic Festival.
Admission is free.
​Professor Worby will be introduced by Sir Guy Green, AC, KBE, CVO, former Governor of Tasmania and Honorary Antarctic Ambassador.
Antarctic Expo Set To Impress

The Antarctic Expo (Saturday 10 and Sunday 11 September) is set to impress, with a fascinating display from most of the major players in the Australian Antarctic sector.  Those include the Australian Antarctic Division, CSIRO Marine Laboratories, the Institute for Marine and Antarctic Studies (IMAS) and a score of companies and agencies involved is supporting Australia’s important role in Antarctic science.Presented on the Hobart waterfront at Princes Wharf No.1 Shed, this two-day expo will allow visitors to learn first-hand how Australians and their colleagues live, work and enjoy themselves in the coldest place on earth.  You can see the equipment, study the science, learn about the history and talk to the people who keep Australia’s four ANARE stations functioning.  There are even opportunities to learn how you might visit Antarctica as a tourist or an expeditioner. Admission to the is entirely free to the public. Exhibitors include:Antarctic Ship Tours
You can also visit the Antarctic ships Aurora Australis and L’Astrolabe, berthed at Princes Wharf, but you will need to pre-book tickets on the festival website here: BOOK TICKETS
Tickets available from Monday 1st August 2016.
All donations go to the work of the Mawson’s Huts Foundation.
October 2015

The Australian Antarctic Division (AAD) hosts the Antarctic Seminar Series to provide an opportunity to showcase work undertaken through the Australian Antarctic program and related Antarctic activities. The Antarctic Seminar Series is presented by AAD staff and visitors from a wide range of organisations on science and non science topics. The seminars are suitable for people interested in Antarctic or environmental fields, the science community, university staff and students and visitors. The general public are encouraged and welcome to attend. Seminars are held in the AAD Theatrette (Hurley Building) on Thursdays at 11:30am, unless otherwise noted and are usually 40 min to 1 hour duration. For maps and directions see visiting AAD headquarters.

Science in the Spotlight (SITS) seminars (a component of the Antarctic Seminar Series) are suited to a general audience and are held on the first Thursday of the month. The SITS seminar series provides an opportunity for the AAD Science Branch to showcase the three AAD science programs: Environmental Protection and Change, Southern Ocean Ecosystems and Ice, Ocean, Atmosphere and Climate.

Seminar information Individuals or groups outside the AAD who would like to be notified via email of upcoming seminars, or who have other seminar enquiries, please contact the AAD Seminars Coordinator.

Other seminar series Other seminars series in Hobart include:
CSIRO Marine and Atmospheric Research
Institute for Marine and Antarctic Studies (IMAS)
Royal Society of Tasmania