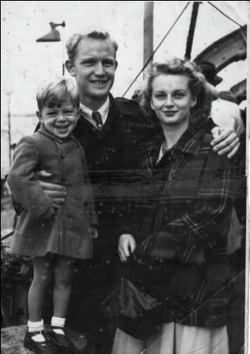 Photo by Sun Pictorial.
_We left from Station Pier ,Williamstown. It was a very straightforward departure but in Hobart (We had to pick up our two Cosmic Ray Physicists ,Nod Parsons & Peter Fenton from the University and their equipment..possibly our Engineer) we had quite a good send off with streamers and many good friends.   The diary extract reads as thus..3rd April 1950.   “It was overcast with low & middle level cloud & a cool breeze.. We took the train to Williamstown from where we were staying in Melbourne (I had been at the Weather Bureau, on West Terrace in Adelaide..it now has moved out near the University) Arrived at the ship at 1030AM and took my wife & son (Beryl & Colin) on board and to the Ward Room & sat around until noon when I had to say a very sad farewell, believe me it was hard to do this. The ship left the Pier with streamers and many sorrowful faces (including my own).
Trevor Heath put on a round of drinks in the Ward Room then dinner. Introduced to the skipper and his name was Lt CDR Shaw who happened to be our new Gunnery Officer during WW2. Strange he did not remember me?  Through the heads of Western Port Bay at 4 PM & saw the wreck of the “Time” freighter. Tea at 3.30PM & my abandon ship station was on the L C V P. Met one of the crew who also was on “HMAS Australia” and we both remember each other. (his name was FROST). The sea now was a long moderate southeast swell and we are heading into her! (with a “blunt” bow!) Had a shower & cleanup before dinner in the Wardroom with a few beers. After dinner we played 31” ,the loser buying beers for all-I never lost! Left the Wardroom at 11PM, walked around to deck and to my cabin which I shared with Nod Parsons, Norm Figg (our Cook), & a ‘tradie’..cannot remember his name as he was only down for the ‘changeover’. So ends my first Day”
Trevior Boyd

PS. The ship (Labuan) only lasted the one trip to MI/Heard Island before falling to pieces and we were stranded on MI but finally left on the ANL line “The River Fitzroy” in 1951. 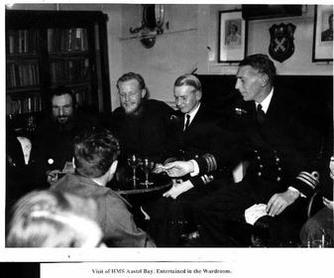 The wardroom onboard the HMS Austel Bay. Photographer unknown
_The photo was taken in 1950 on board the destroyer (Frigate?) HMS Austel Bay which had visited NZ & was on it’s way back to UK. The HMS Austel had dropped into Macquarie Island bringing much needed supplies. Myself being an old salt from WW2 was quite impressed and accepted accordingly.

I am the 2nd on the left. On my right is Cyril Park ,our Engineer, who I think was the son of the Lord Mayor of Hobart at that time but now Cyril is passed on. On my left is the CEO & next to him is the Commanding Officer , ‘Skipper’.( Commander).

The person with his back to us is Jack Windsor, our Senior met. man who unfortunately passed away in January 1951 from peritonitis after an operation by our Doctor Kostos Kalnenas who performed an appendectomy. (The appendix had burst) He is buried on the top of Wireless Hill near Mawson’s old antenna site. Of the Met team I am now the only surviving person (four out of 14 members in the team).

The French ship’ ‘Commandant Charcot’ was 400 miles west of us enroute to their Adelie land Base but they decided to call in to see us and see if they could be of any assistance but unfortunately they could not help Jack as he was beyond any help. This was the beginning that all future expeditioners must have their appendix removed before going down south. John Windsors name is on the plaque in St. Pauls Cathedral in Melbourne alongside my old ship HMAS Australia.
Trevior Boyd
Davis 1959 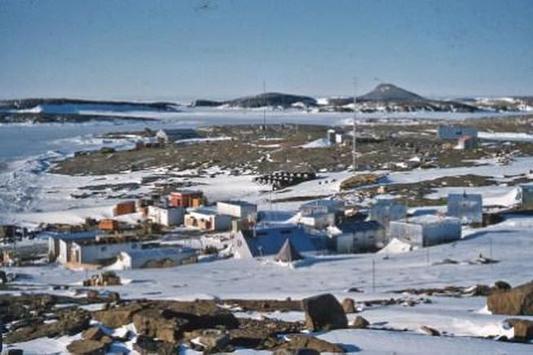 _A location shot, looking north-east.  Biscoe hut is behind the pyramid tent, aircraft hangar in the far background.
Grahame Budd. 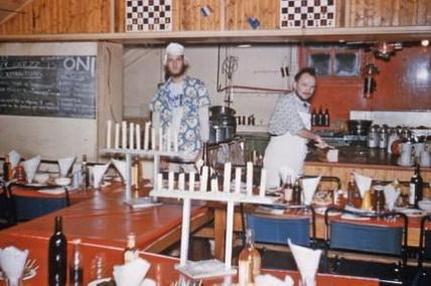 _Looking west from the mess into the kitchen area, with the mess tables rearranged for the occasion. The figures, left to right, are Allen Sawert (radio operator and slushy) and Paul Teyssier (cook).  Above their heads are the chess boards recording the state of play in our games with the Russians at Mirny and the French at Kerguelen.  The notice on the blackboard says that ‘Fancy dress is ON’.
Grahame Budd.