Down South: Australian tradies in Antarctica

Photographer  Susan Gordon-Brown has spoken to 25 ANARE tradespeople and photographed them as they are now. The exhibition "Down South: Australian tradies in Antarctica is a combination of these portraits and their stories, as transcribed by Gayl O’Connor.

The exhibition was displayed at Mawson Place, Hobart from June 16th -20th 10am -4pm. There was be a special opening on Saturday 18th June 2011 at 2pm. This was co-sponsored by Antarctic Tasmania, a Tas govt body which supports and promotes Antarctic activities and events.

Down South has been launched!!  We had a very successful launch at Mawson Place, Waterside Pavilion, on the docks in Hobart. Fred Elliott officially opened the exhibition with a great speech that included some funny anecdotes from his time in the Antarctic and also mentioned many names of guys who were not able to be there.

Ingrid McGaughey introduced both myself and Fred and spoke so well about the ANARE club and of the importance of recording these stories. Brian Harvey was missed at the event, but not forgotten.

Paul Cullen did a great job organizing the catering and helping on the day as well as organizing volunteers to be at the exhibition each day it was open.

It was truly wonderful to see everyone taking the time to read the stories and to see guys who were in the exhibition in attendance. We had great press coverage. 2 spots on the 6pm news, Win TV and Southern Cross TV, an article in the Sunday paper and ABC radio had Dave McCormack and Jan Adolph chatting with Michael Veitch on his afternoon program. This encouraged more locals to come and view the work. On the Sunday night people kept coming in til way past the closing hour! I even had people turning up as I was packing up the exhibition. I was really happy with the response and am confident we will have a similar one when it is shown in Melbourne in August.

The launch at the World Trade Centre will be at 10.30am on the 3rd August. Invitations will be going out this week.

The Blurb.com book I made from Bob Dingle’s colour slides was very popular, I will try to incorporate his images into exhibition spaces that have a screen and make a slide show. His book is available from the Blurb.com site, it is 80 pages, hard cover with a dust jacket and $61.94 plus postage. Bob has agreed for me to make this available to the public.

Many people said they wanted to see a book of the exhibition. This would be a great idea but it would need funding for design, writing, printing and production costs. If anyone has any ideas on how to do this I would be really happy to discuss it further. Perhaps it can include historical notes also and talk of people like Phil Law and George Smith.

Thanks once more for all the support of the ANARE club, it has been a real privilege to meet you.

Real to reel, the newsletter of the Tasmanian Branch of the Oral History Association of Australia featured a story on Susan Gordon Brown's exhibition 'Down South'. (No. 61 April 2011).

It contains background information on Susan's project as well as several portraits and excerpts featuring Jack Ward, Tom Maggs, Enid Borshman and Norm Tame. It can be accessed here... 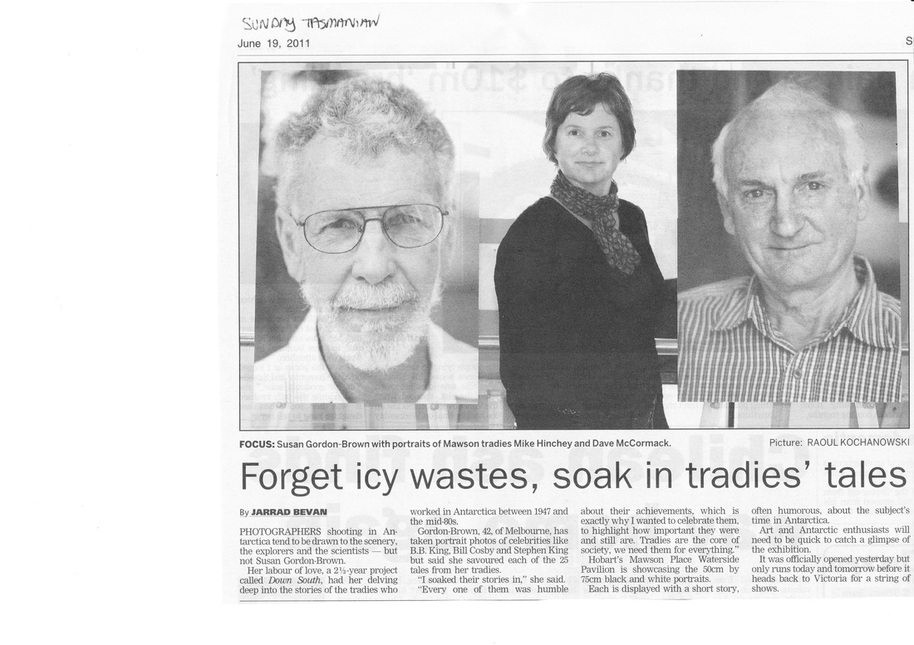