Excerpt from the station Newsletter...

'...An early rise for everyone on Tuesday June 21, Midwinter Day. And what a beautiful day it was. Minus 15 and hardly any wind at all, the sky was cloudless. The day started in the kitchen with early preparations for brunch and midwinter’s dinner. Then at 10 am we shot upstairs to the cinema where we had a video hook-up with Kingston and the other stations to parry for who had the best events planned for the day. On the vote, Mawson won hands down. Then we scurried down to a brunch of croissants, bacon, fish pie and other artery clogging goodies.

Once that had all settled and the twilight started to seep in we all made a mad dash down to the midwinter swim. We had the hole in the harbour with RMIT van and Ebox change rooms and just behind them was the outdoor spa. There was much merriment and freezing bodies as one after the other we dove into the icy waters of the great southern ocean.

From the swim we came up for final preparations of the dining room which looked fantastic, adorned in the flags of Antarctic expedition nations and an ice sculpture of a penguin created by our very own Wilko. Pre-dinner drinks were held at 3 pm and then whilst looking smick in our midwinter finery we had our official Mawson winterers photo. At 4 pm we commenced the marathon 5 hour, 10 course meal. Scotty, the chef, did an outstanding job with every meal a gastronomic delight. The courses were:

After dinner was a presentation of life at Mawson back in ’62 by Rolf, then Tom, Muzz and Cotty belted out some tunes as the rest of us lolled around like elephant seals. This was Midwinters - Mawson. 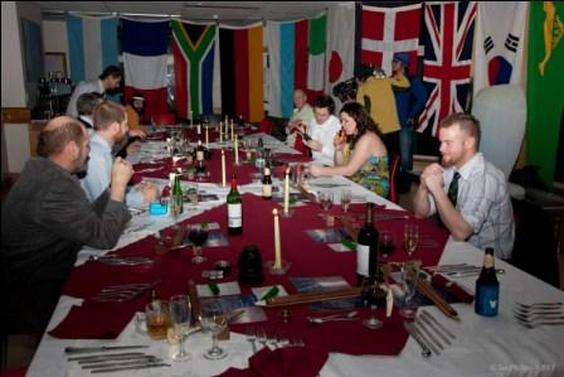 The dinner is about to commence. Photo by Ian Phillips. 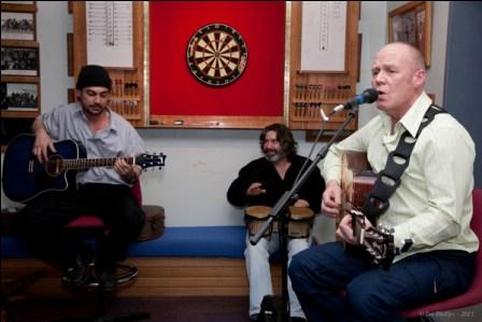 Post dinner entertainment. Photo by Ian Phillips.
Many thanks to Ian Phillips and other Mawson expeditioners for supplying the photos...