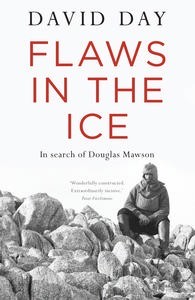 Flaws in the Ice: In search of Douglas Mawson
AUTHOR: DAVID DAY

In Flaws in the Ice, prize-winning historian David Day searches for the real Douglas Mawson.  After travelling south on his own six-week odyssey to the Antarctic, the author answers the difficult questions about Mawson that have hitherto lain buried - from questions about his intimate relationship with Lady Scott, and his leadership of the ill-fated Australiasian Antarctic Expedition of 1911-14, to his conduct during the legendary trek that led to the death of his two companions.  He also explores how Mawson subsequently concealed his failures and deficiencies as an expedition leader, and created for himself a heroic image that has persisted for a century.

For many decades, there has been only one published, first-hand account of the expedition - the one written and orchestrated by Mawson himself.  Only recently have alternative accounts become publicly available.  The most important of these is the long-suppressed diary of Mawson's deputy, Cecil Madigan, who is scathing in his criticisms of Mawson's abilities, achievements, and character.  At the same time, other accounts have appeared from leading members of the expedition that also challenge Mawson's official story.

In this compelling and revealing new book, David Day draws upon all this new evidence, as well as on the vast research he undertook for his international history of Antarctica, and on his own experience of sailing to the Antarctic coastline where Mawson's reputation was first created.  Flaws in the Ice will change perceptions of Douglas Mawson forever.

'Day's antarctica is an impressive piece of work, an impartial and deeply researched account of the politics of polar annexation.' The Time Literary supplement

'Day has done a remarkable job of collating information from rich and varied international sources.  Thanks to Day, the intrigues and posturing that saturate the history of this distant land have now been exposed.' Nature 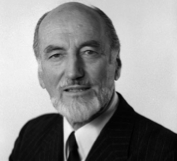 Phillip Law is renowned as the first and best-recognized Director of the Australian Antarctic Division, responsible for conduct of the Australian National Antarctic Research Expeditions (ANARE) 1947-66, with the emphasis on science. He established most of the ANARE traditions and oversaw the location and establishment of all Australian Antarctic stations. He was widely recognized and decorated for both national and international influence. His main trait was perseverance in fighting to achieve his goals. In 1966, he became Chief Executive of the Victoria Institute of Colleges to develop, highly successfully, non-university tertiary education in Victoria. Throughout his professional career, he was a prolific diarist, writer and publicist.

Patrick Quilty and Des Lugg have written an interesting and informed article which can be accessed online.  The article will also be published in The Aurora at a later date.

The paper reviews Law's development, his career, particularly in the Australian Antarctic Division, and his role in the Victoria Institute of Colleges. It includes his list of awards, his memberships of societies, and importantly, the most comprehensive and up to date list of his publications.

The publication is an Australian Academy of Science publication produced through the publishing arm of CSIRO.
posted 12th June 2013
Pinto and the Nella Dan by Wendy Mclennan
Seasoned environmentalist Wendy McLennan publishes a tale that fosters awareness and enthusiasm for the earth and its beautiful creatures

Who said penguins are flightless birds? They can fly but only underwater. Some can accelerate up to 20 miles per hour, dive to depths of several hundred feet, and stay underwater for about 20 minutes. Ironically, they have extremely good hearing even without visible ears.  Penguins are such interesting creatures. However, readers will come to know an even more unbelievably amazing penguin in author Wendy McLennan’s newly published picture book, titled Pinto: The Pint-sized Battery-operated Robotic Penguin.

Pinto was developed by Dave, a chief environmental scientist who also specialises in robotics and regularly travels to Antarctica. Pinto is a powerful computer with a bright child like personality and loves to learn.  His curiosity often gets him into trouble.  He has a microphone as ears and cameras as eyes. His tuxedo body suit is a mixture of all the penguins so can fit into any rookery. He can do mostly what real penguins do and much more. He stores valuable information into his little state-of-the-art microcomputer brain which is smarter and quicker than any human being. What’s more he can talk to both humans and animals.  He was designed to help scientists working outdoors and this tale is about all his adventures.

Pinto is loosely based on the real-life expedition and final sinking of the Nella Dan in 1987.  Pinto faces many challenges - once when he is collecting marine samples he is almost swallowed by a whale, but he is able to use his turbo switch to get out of trouble.  He is clever, brave and curious but when his batteries drain he is helpless.  When the Nella Dan runs aground he is swept overboard, his batteries deplete, but all is not lost as he turns on his special locator beacon.

Pinto: The Pint-sized Battery-operated Robotic Penguin is a one-of-a-kind storybook that can instill in the next generations a love of the earth and the marvels of this remote and intriguing part of our planet.  The book will create an enthusiasm for children to think about their life’s direction and enjoy learning and obtaining the skills to enable them to access the vast array of exciting jobs and opportunities available.

About the Author:  Wendy McLennan spent seven years working with many scientists dedicated to the continuing study of Antarctica.  As scientific and voyage coordinator she tells the story through her first hand knowledge of Antarctic expeditions.  She always regretted that her children could not share her experiences.  So she adds a twist to the real live stories through Pinto to bring the excitement of expeditions and adventure in Antarctica to modern children who are very computer aware.

Wendy currently lives with her husband Roger in Launceston, Tasmania, and enjoys the delights of life with their children and grandchildren. 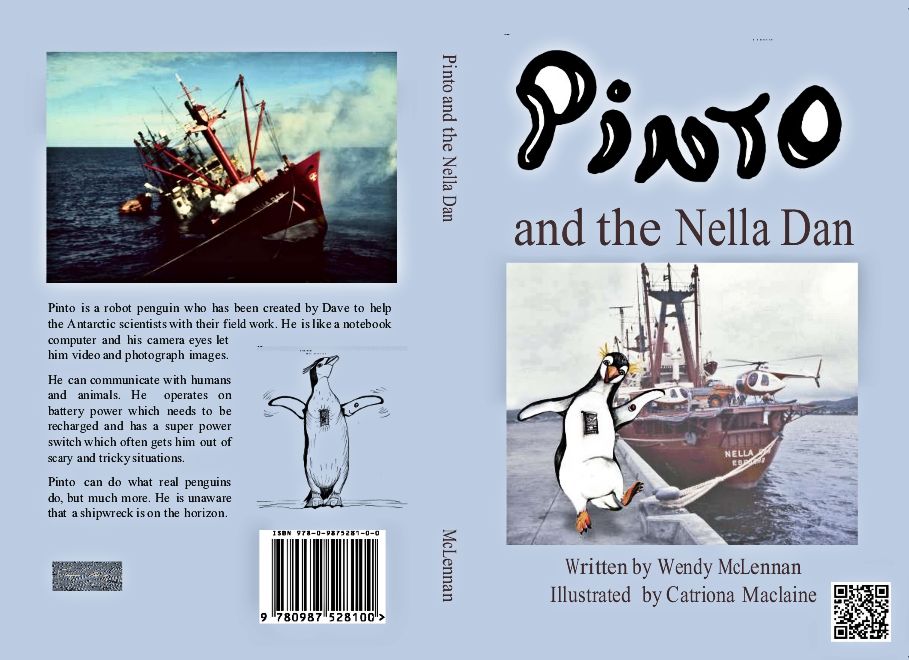 A hostile beauty: Life on Macquarie Island by Alistair Dermer 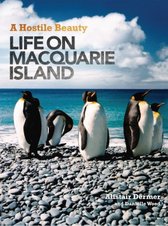 '...There are few places today that are truly wild.  Macquarie Island is still one such place, a small, wind-blasted rocky outcrop between Tasmania and Antarctica. In exquisite pictures and words, A Hostile Beauty tells the story of this extraordinary Australian outpost teeming with life.

Alistair Dermer's stunning photography gives us an up-close look at the lives of the inhabitants: gentle gentoo penguins, engorged elephant-seal bulls and scavenging skuas, and takes us deep into a landscape that is as beautiful and life-giving as it is hostile and pitiless. Let these superb images, from the fury of the squalling Southern Ocean to the warm, trusting eyes of a seal pup, transport you to one of the most remote and spectacular places on Earth....'

Author Information Alistair Dermer spent six months on Macquarie Island over the summer of 2001-02, working as a research assistant and living in a small cabin on the east coast, each day capturing the rugged beauty of the island with his two analogue cameras. He works in natural-resource management and is devoted to our natural heritage. He has worked with the Australian Antarctic Division, Conservation Volunteers Australia, Greencorp and most recently with Bush Heritage Australia.

Danielle Wood lectures in writing at the University of Tasmania and is author of the award-winning fiction books The Alphabet of Light and Dark and Rosie Little's Cautionary Tales for Girls. She visited Macquarie Island in 1998 while working as a media officer for the Parks and Wildlife Service and the island's beauty and wildness have been an ongoing inspiration for her writing.

The Quest for Frank Wild by Angie Butler 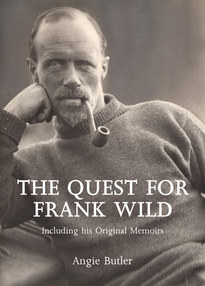 The Quest for Frank Wild tells the gripping story of Angie Butler’s determination to unravel the truth of the final years of Frank Wild, one of the greatest British Edwardian Polar explorers of all time.

He supposedly died in penury unable to come to terms with Ernest Shackleton’s death and forgotten by his fellowmen in the small mining town of Klerksdorp near Johannesburg. The little that was known of his later life in South Africa has been maligned by hearsay and sensational journalism and most tragically of all, no-one knew where he was buried. An outstanding man lost in life and in death.

The author’s seven year journey finally uncovers an extraordinary untold story and by doing so not only fulfils Wild’s wish to have his Memoirs published but ultimately makes an astonishing discovery.

The Memoirs stand alone as a unique account of Edwardian Polar exploration.

In Bed with Douglas Mawson by Craig Cormack 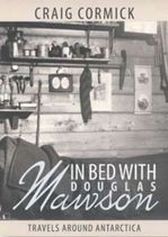 Departing Hobart on a seven-week voyage onboard the RSV Aurora Australia, Craig Cormick is fulfilling a long-time dream to visit the frozen continent of Antarctica - an adventure to one of the few under-discovered regions of the world.

As they navigate through the wild Southern Ocean and explore the icy coastline of Antarctica continent, he muses about the great explorer and geologist Douglas Mawson. Mawson's ill-fates, but scientifically successful, Australian Antarctic Expedition sailed from Hobart in 1911, as Scott and Amundsen were embarking on their race tot he South Pole.

Visiting the three Australian bases, with Mawson's ghost at this side, Craig Cormick describes the exhilaration of seeing his first iceberg, climbing a mountain on the antarctic plateau, flying in a helicopter of the Vestfold Hills, photographing Adelie penguins, seeing the spectacular Aurora Australia in the sky, smelling elephant seals and discovering the mysteries of 'crap and wrap' field toilets.

In Bed with Mawson is a humorous and thoughtful exploration of the enduring spirit of discovery, adventure and comradeship around Antarctica.

The book was recently reviewed by the Sydney Morning Herald -see here...

An empire of Ice by Edward Larson 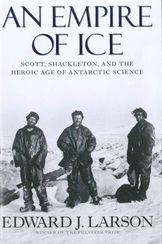 Published to coincide with the centenary of the first expeditions to reach the South Pole, An Empire of Ice presents a fascinating new take on Antarctic exploration. Retold with added information, it's the first book to place the famed voyages of Norwegian explorer Roald Amundsen, his British rivals Robert Scott and Ernest Shackleton, and others in a larger scientific, social, and geopolitical context. Efficient, well prepared, and focused solely on the goal of getting to his destination and back, Amundsen has earned his place in history as the first to reach the South Pole. Scott, meanwhile, has been reduced in the public mind to a dashing incompetent who stands for little more than relentless perseverance in the face of inevitable defeat.

An Empire of Ice offers a new perspective on the Antarctic expeditions of the early twentieth century by looking at the British efforts for what they actually were: massive scientific enterprises in which reaching the South Pole was but a spectacular sideshow.

By focusing on the larger purpose, Edward Larson deepens our appreciation of the explorers' achievements, shares little-known stories, and shows what the Heroic Age of Antarctic discovery was really about.

Professor Larson was interviewed on The Book Show on ABC Radio National on Thursday 14 July 2011. The book by Professor Edward Larson, is being published by Inbooks and will be available in July 2011. 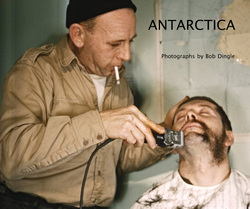 Susan Gordon Brown recently viewed some of Bob Dingle's photographs from his many trips to the Antarctic. She subsequently compiled a book which is filled with a selection of photographs as a private gift for Bob.

Since then a few other Club members have seen the book and requested copies. With Bob's consent, the book is available for general purchase at cost price from the internet 'Blurb' bookstore.

The book includes many classic images of working and social life down south. It can be purchased for $61.94 plus shipping at http://www.blurb.com/bookstore/detail/2271046.